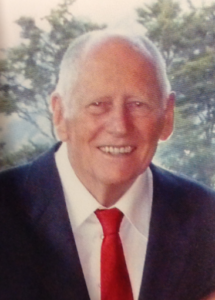 It is with great sadness we report the death of a colleague, Leslie Andrew Erasmus on the 3 November 2016, aged 82 years. Les was educated at Pretoria Technical College 1948-51, then served  as an apprentice fiter and turner at the Mufulira Copper Mines, Zambia, 1952-1954. He went on to read Mechanical Engineering at the University of  Capetown 1954-1958, being supported on a  Northern Rhodesia Chamber of Mines University Bursary, graduating  with a BSc in Mechanical Engineering in 1958.

Armed with a Federation of British Industries Post-gaduate Scholarship, 1959-1960, he spent the next two years in the United Kingdom working with Steel Peech and Tozer Ltd, then the British Iron and Steel Research Association and finally the United Steel Company’s Research and Development Department. He subsequently worked for Steel Peach and Tozer from 1961 to 1964, as a Senior Research Metallurgical Engineer with responsibility for research projects investigating the effects of aluminium and vanadium on the structure and properties of mild steel and their role in controlling austenite grain size, forgeability and impact properties of low alloy steels. Les obtained the  Licentiate of the Institution of Metallurgists, 1962 and an MSc(Eng), University of Capetown, 1971 and his PhD, also from the University of Capetown, in 1972.

In 1965 he was appointed to the Department of Mechanical Engineering at the University of Canterbury, New Zealand, as a Lecturer in Mechanical Engineering, with responsibility for Metallurgy and Materials. He became Senior Lecturer in 1968, Reader in 1973 and Professor of Mechanical Engineering in 1979 and Head of Department for various periods  from 1983 until retirement in1993. He played a significant leadership role in the development and implementation  of the Materials Engineering Curricula for the Degree of Mechanical Engineering, Postgraduate Study Programmes and affiliated faculty programmes, maintaining high standards in these courses. His enthusiasm instilled an appreciation and understanding of metallurgy and materials in the many undergratuate  students who attended his lectures. His many contributions to continuing education programmes, seminars, conferences, research and consultantcies, in New Zealand, have extended this awareness of the importance of engineering materials to a wide range of practicing professional engineers.

On arrival in Christchurch, Professor Erasmus developed a research programme to investigate those mechanical properties of steels  that were of particular relevance in the New Zealand civil engineering context, where structures are subject to intense earthquake loading. An appreciation of the significance of the plastic ductility of steel reinforcement to the capacity design criteria used in New Zealand building specifications, resulted in research efforts being focused on methods of improving the resistance to brittle fracture of locally manufactured structural steel products, especially reinforcing bar. The resultant investigations into the role of nitrogen  and the effects of strain age embrittlement on steel toughness, was an important theme in the initial research.There followed  work on high strength low alloy (HSLA) steels and their application in New Zealand steel production. This research contributed to continuing improvement of the mechanical properties of locally manufactured structural steels and reinforcing bar, particularly that used in buildings designed to meet the New Zealand Seismic Loading Code. Les was a recognised national and international authority on the role of nitrogen, microalloying and dual phase effects in structural and specialty steels.

Les received a number of awards in appreciation of his significant contribution to metallurgical research and engineering in New Zealand, including University of Canterbury Erskine Fellowships (1982 & 1989), IPENZ Fulton Downer Gold Medals (1984 & 1988),  the IPENZ Angus Award (1989 & 1994) and the Engineering Materials Group of IPENZ R H Cooper Award (1995). His professional reputation in metallurgy resulted in requests to advise and consult on metallurgical matters in New Zealand and overseas. He also had an established reputation in failure analysis and received the Henry Wigram Medal of the Royal Aeronautical Society in 1982 for his lecture and report on an Aero Commander which crashed into Mt Ruapehu in 1961. In 1997 was he awarded the New Zealand Science & Technology Medal for “Outstanding Contributions to Metallurgical and Materials Engineering in New Zealand”.

Les is survived by his wife, Daphne, three sons and five grandchildren. A devoted husband, father and grandfather and a loyal colleague, who will be missed by many. The delay in producing this obituary follows from the Christchurch earthquake and with the rebuild of the Erasmus house, all of Les’s papers being in container storage.